Are We All Lost Beyond Redemption?
Written by DiMadWriter

All what I’m about to narrate happened within 15 hours.

I must have been bored to have done all that the night before. I’d normally wait till an hour before departure to throw a few things in the bag (forgetting one or two) and run out like a school kid who overslept. But on that day, I took my time to pack my bags properly and check my list twice. When I was convinced I was ready, I lay down to rest.

I picked up my phone to check up on my friends and honestly, I wasn’t prepared for what my eyes saw. My friend had uploaded a disturbing video of a cultist operation. The video started by showing different severed body parts of a young man littered across the road. His elbow had been disengaged with an axe and flown across the road; the head was axed so many times, his brain was scattered on the tar. Describing it now, I can almost see the pictures right in front of me. Horrifying.

I quickly shut down my phone and tried to go to sleep. Of course, it wasn’t easy. My head was running wild. After about an hour, I succeeded in drifting away. The next morning, I was thankful for all the things that kept me from thinking and seeing pictures in my head. In a few hours, I had already boarded a bus.

Looking out the window, I felt the cold morning air brush across my face. I saw cars moving up and down the road. Most importantly, I saw people surviving. We drove by an old man carrying a pan that looked heavy on his head. I watched a child race after our bus, hoping to sell a can of water. We came across a woman standing by the roadside, two big bags next to her, full and heavy. She joined us in the bus after bargaining with the driver.

I’m not sure if it was the soulful music blasting through my headphones into my ears or all that I’d seen, but I immediately turned gloomy. I remember thinking, these are people just trying to survive. They probably have enough problems to deal with already. Yet, one father will check his phone this morning to see a video of his son butchered on the streets. One lady will go online her phone tomorrow to see a heartless man standing over the lifeless body of her brother, firing bullets into his skull as though to kill his spirit.

Aren’t there enough things killing people as it is? There are sicknesses, accidents; people sleep, and just don’t wake. We’re not in any way running low on mortality so why do we feel the pressing need to contribute to it? Don’t we have enough pain in the world as it is? Let’s not go into details on the countless things that bring people pain. The question is, why are we so eager to add to it?

This applies on all levels. I think the world is so messed up that we owe it to one another and to ourselves to share love. An employer should care sincerely for his/her employees and not make life any more miserable for them than it needs to be. When you come across lost properties, think about what the owners may be going through, and then think about whether you want to add to it or you’re going to do the little within your power to help them survive it. Just a word of encouragement could go a long way. Make someone smile once, it might be the one time they get to smile in a very long time.

I was still going over this in my head when our bus had to slow down because cars were parked carelessly by the roadside. We came to find that there was a feud which people were trying to resolve. A young man had a knife in his right hand; he held on tightly to it. I had no idea what the fuss was about, but there stood a man with a knife that he planned to use on another human being. Whatever brought out that part of him. How did we even get here?

Then it hit me!

THUG LIFE— The Hate U Give Little Infants F***s Everyone.

People are exposed to so much negativity and pain that it becomes the only way we know to live. We take it and we give it back. Love becomes a luxury that we can’t afford. People are abused at very tender ages; some of them turn out to be abusers. People have been hurt so much, they self-destruct taking as many as possible with them.

I’m afraid young people see more pain on TV than they see beauty. They see their mothers or fathers suffer domestic abuse and some of them end up getting abused as well. We feed them all of this daily, and I fear for where the world is headed. Thus the question: are we lost beyond redemption? Is it possible to break this cycle? Look at the world around you and tell me there is hope.

Maybe I need to hear it. Maybe you need to say it. Things might start to change if we begin to believe it. Here’s what I know; if there’s a chance, it’s in our hands– each and every one of us. 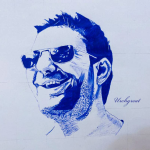 Di MadWriter is a Nigerian storyteller and poet who fully exercises his right to laugh whenever and wherever he wants. He thinks madness is a spectrum; it is not absolute. Every new day, he chooses whether to be rigid or informal. He loves to see people laugh, or smile at least.
View all posts by Di MadWriter

Get new updates directly into your inbox

Please wait...
Want to be notified when an article is published? Enter your email address and name below to be the first to know.
I agree to receiving email updates from this site